If a user is assigned a role that excludes an operation in NotActions, and is assigned a second role that grants access to the same operation, the user will be allowed to perform that operation. NotActions is not a deny rule – it is simply a convenient way to create a set of allowed operations when specific operations need to be excluded.

You can use the Get-AzureRmRoleDefinition cmdlet to view a list of built-in roles:

You can view the list of custom roles (ones that you have created) available in the currently selected subscription by using the -Custom switch of the same cmdlet.

How to view the possible operations for a particular resource

When you are creating your own roles, you might want to see all the possible operations that can be permissioned for a particular resource type. In the example, below Microsoft.Sql/ represents Azure SQL Database and we use the Get-AzureRmProviderOperation cmdlet to search for all operations that begin with Microsoft.Sql/.

There are two ways to create a custom role .

The PowerShell code below shows how you can create a custom role based on an existing one:

There are two important points to be aware of when creating custom roles:

As you may have noticed from the code snippet above roles can be applied to multiple different scopes e.g. at the subscription level, resource group level or to an individual resource.

It is important to remember that access  that you grant at parent scopes is inherited at child scopes.

I have added a few example custom roles to my GitHub repo here:
https://github.com/vijayjt/AzureScripts/tree/master/rbac/role-definitions

The only thing you’d need to change is the assignable scopes in order to make use of the role definitions.

There are only two roles in the repo at the moment:

You can find an example Plaster manifest for creating the scaffolding for an ARM template here in my Github repo https://github.com/vijayjt/PlasterTemplates/tree/master/AzureResourceManagerTemplate.

This is a good start but in this post I will walk through some additional types of tests that you can run and also some gotchas I found with the example in the Azure Quickstart templates Github repo.

Checking for expected properties in a JSON file

The example in the Azure Quickstart templates Github repo uses the code below to check for expected properties:
There is a problem with this code in that the order in which the properties are returned through the line with the ConvertFrom-Json cmdlet may not match the order used by the expectedProperties variable. This issue can be solved by simply sorting the properties when you store them in the expectedProperties variable and also after the call to Get-Member.

Then we put the tests for parameter files in a separate context block and use TestCases parameter for a It block.

Testing a resource has the expected properties

Another test we can add as part of our Pester testing script is to use the Test-AzureResourceGroupDeployment cmdlet to validate the template with each parameter file.  This requires creating a resource group.

When creating a resource group you should try to randomise part of the resource group name to avoid clashes, so for example you could use something like:

Here we use Pester-Validation-RG to easily identify what the purpose of the resource group is. We then prefix this with the first 5 characters from a GUID – to avoid clashes in the event you have multiple users or automated tests running at the same time in the same subscription.

We can then use the BeforeAll block to create the resource group before running the tests and the AfterAll block to delete it after all tests have run.

We then run Test-AzureResourceGroupDeployment with the template and each parameter file in turn uses the TestCases parameter for the It block.

There are few things to note with this:

In a recent post I wrote about Azure App Service Environments (ASEs) and AD Integration. If you look at the Azure Quickstart template for a Web App in an ASE, you will notice that the location is passed in as a parameter instead of using the resourcegoup.location() function. This is because there is a known issue where the backend infrastructure for ASEs is not correctly handling the location string returned by this function call. This is mentioned in the following stackoverflow article http://stackoverflow.com/questions/42490728/azure-arm-cant-create-hostingenvironments-location-has-an-invalid-value.

Recently I had to look at a case where there was a requirement to communicate with an Active Directory Domain Controller from a Azure Web App. We were looking to use App Service Environments, looking at the documentation published here https://docs.microsoft.com/en-us/azure/app-service-web/web-sites-integrate-with-vnet,it stated: 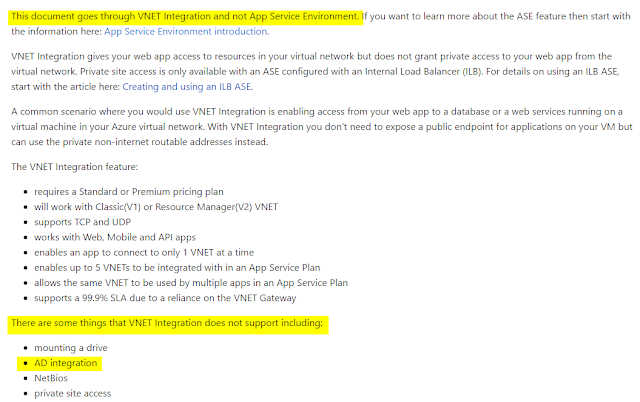 This caused some confusion as it appeared to suggest you could not communicate with domain controllers but it appears this is actually more in reference to domain joining.

Furthermore, there is a Microsoft blog post on how to load a LDAP module for PHP with an Azure Web App – which indicates that it is a supported scenario.

You can relatively easily verify this by deploying an Azure Web App with VNET integration or in ASE. I used a modified version of the template published here https://github.com/Azure/azure-quickstart-templates/tree/master/201-web-app-ase-create to create a Web App in an ASE.

I then created a domain controller via PowerShell in this Gist:

Then I used the PowerShell code in this Gist to install AD related roles and promoted the server to a Domain Controller via an answer file – change the forest/domain functional level and other settings to suit your needs.

At this point you can perform a rudimentary test of AD integration via Kudu/SCM PowerShell console.

If you wish to test using PHP, you will need to download the PHP binaries from http://windows.php.net/download/, and extracted them on my computer, in the ext directory you will find the php_ldap.dll file. Note the version you downloads needs to match the version of PHP you have configured your Web App with, which in my case was 5.6.

Next from Kudu / SCM I created a directory named bin under /site/wwwroot, in that directory. Then using FTPS (I used FileZilla, but you will need to create a deployment account first) to upload the php_ldap.dll file.

Then create a file named ldap-test.php with the following php code:

If you then browse to your web app domain and the file e.g. http://mywebapp.azurewebsites.net/ldap-test.php

I recently had a need to create a script to generate a report on Azure RBAC role assignments. The script does a number of things given the domain for your Azure AD tenant:

The user running the script must have permissions to read permissions e.g. ‘Microsoft.Authorization/*/read’ permissions
The script can either output the results as an array of custom objects or in CSV format which can then be redirected to a file and manipulated in Excel.
The script could be run as a scheduled task or via Azure Automation if you wanted to periodically run the script in an automated fashion, it can also be extended to alert on certain cases such as when users from outside your Azure AD Tenant have access to a subscription, resource group or individual resource. The latter item is not a default feature of the script as depending on your organisation you may legitimately have external accounts (e.g. if you’re using 3rd parties to assist you with deploying/building or managing Azure).
The script has been published to my GitHub repo. Hopefully it will be of use to others.